Article written by Miriam Hermawan. Archieved at 22 May 2017 on category Short Story, The Jakarta Post
IQBAL knew, long before anyone did, of the story that Mai-Mai wanted to tell the world. He was not in the story. He only knew it happened in the strawberry garden her father owned and maintained. Mai-Mai always referred to her father’s garden as her private paradise, a place where she could lose herself among rows of strawberry patches. Though she never told him the story, Iqbal was the sort of person who had the ability to connect the dots without being asked to. When she whispered into his ears the known facts of her life, he sifted them carefully in his mind until the truth became clear to him.
“My father is kind,” she once said, in a moment of bizarre revelation, when Iqbal and Mai-Mai were forced to share a bed with each other on a trip to Lembang, unable to secure two separate bedrooms or a bedroom with separate beds because it was late and the motel was packed with out-of-town visitors coming to celebrate the first day of Eid. Neither of them had had the heart to let the other sleep on the floor, or on the dusty sofa that looked as though it had not been sat on for years.
They were lying in bed, her back against his, the fan above them whirring in a quiet hiss, and Iqbal conjured up the image of Mai-Mai’s father in his mind, tending to the garden with meticulous care. Here was Mai-Mai’s paradise, and she must have been smiling at him as he beckoned her to taste a new batch of ripe strawberries he had just picked. Iqbal saw, in this image, Mai-Mai running toward the man, at five years her body still small enough to fit the embrace of an arm, her eyes fixed onto the red strawberries.
Then, he tried to picture her growing taller in the garden, older, darker. Her limbs hung about her as though they were nothing more than extra weights added to her own, and as she walked across the garden, one by one the plants wilted, and the strawberries, unripe, oozed pesticide.
In the morning, Mai-Mai noticed the dark circles under Iqbal’s eyes. They weren’t there the night before and so she asked him if he was feeling alright. He didn’t tell her about the sleeplessness, couldn’t bring himself to admit his fears, and spoke, unremarkably, of the weather.
“My father is kind,” Mai-Mai repeated herself when they rode together in a minicolt that had been refurbished as a public transportation ride. The driver, a young man in his early twenties, was smoking clove cigarettes while listening to dangdut music blaring from the radio speakers. “He will love you,” she went on.
The minicolt zig-zagged through traffic, seizing every opportunity to get ahead, as it climbed higher and higher toward the top of the hill. Iqbal looked back and saw the slope, blinking his eyes, then he focused on Mai-Mai’s face. She smiled, holding onto a brown knapsack which clung to her as much as she had clung to it, and he thought of the strawberry garden, wondered if it had changed. 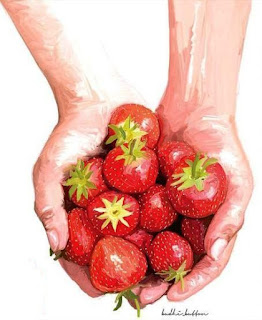 Mai-Mai didn’t say much about her mother, who died young not long after she gave birth to her only child. Her mother had loved the garden with as much passion as Mai-Mai did, was often described by those who knew her as a woman of mystery. Mai-Mai said she didn’t miss her mother, wouldn’t even know how to miss a person she never knew, a face she couldn’t remember. Mai-Mai said when someone asked about her mother, she always told them the truth: the strawberries killed her mother. “The strawberries?” asked Iqbal. Mai-Mai shrugged and said, “She probably forgot to wash them or something.”

“Can’t you eat them raw?”
“Yes,” she bobbed her head excitedly, remembering the experience. “I like them raw. And I never wash them.”
For months, Iqbal stopped eating strawberries. Mai-Mai laughed at him. She was 19, a junior at the City College, and Iqbal was 20. He had never had a girl whom he liked as much as he liked Mai-Mai, and he was willing to give up strawberries for life.
A few years ago, on his birthday, they got into a fight. Mai-Mai brought a strawberry cake to his dorm room as a peace offering. When he refused to eat it, Mai-Mai said she would eat it with him. Iqbal stood his ground, called her childish, asked her to take it away. Mai-Mai said if he would at least try the strawberries, she would reward him.
“What sort of reward?” he asked, cautious, moving closer to her side.
“The kind you’ll never forget,” she said, licking her cream-laden fingers with her tongue.
So he took one bite, strawberry cream dripping from the corners of his lips, Mai-Mai running her thumb quickly across his mouth, his chin, his face. He chewed and chewed for what seemed to be forever, until he finally dared himself to swallow.
“Silly boy,” Mai-Mai giggled and leaned closer to him. “My mother will tell you how silly you are.” She kissed him, easily, lightly, without demands. “My mother who is now in heaven and growing her own strawberries.” He kissed her back, hard, immediate, planting stamps of ownership all over her, for she was his, even when she didn’t realize it.
They got off in front of a house overlooking a strawberry garden. The fruit was green and not yet ripe, a man in a straw hat stood in the middle of the garden with a hoe in his hand. Mai-Mai opened the gate, walked across the lawn and straight into the garden. He followed her, carrying both their knapsacks. MaiMai jumped into the man’s arms.
Later in the evening, Mai-Mai took Iqbal’s hand and led him through the small garden, as if to show him the world’s greatest wonders. The house was dark and quiet behind them, her father and the workers were asleep in their private chambers.
At the far end of the garden was a bungalow, and Mai-Mai told him of a time when her mother used to sit in the bungalow while waiting for her father to finish working on the garden. This was what everyone told her, anyway; it was impossible to know whether it had actually been the case. As a child, Mai-Mai said she used to do the same thing. She would sit and watch the flowers grow, the strawberries, the soil raked and nurtured.
“Maybe that was something I had taken from my mother,” said Mai-Mai, settling herself in the bungalow, dusting the surface of a wooden bench with her hand, beckoning Iqbal to do the same. “I used to really love watching the garden from this spot.”
The spot where they now sat hip-tohip, shoulder-to-shoulder, showed them nothing but darkness. Iqbal held on to Mai-Mai’s hand, the one which had held his, the one which had fed him the strawberry cake years ago, the one that had cared for him, the one she had used to write in her journals, long and complicated words she would not show to anybody but herself, recollections of a garden she had called her paradise, when time was of no essence and love was red — like strawberries.
Staring into the darkness, into the fog that distorted their view of the garden, Mai-Mai tried her damnedest to put together a picture of her childhood in that house, that garden, next to all the strawberries she could have in the world. Love was red like strawberries, its sweet nectar oozing out of its pores as it entered her mouth, and with her eyes closed she relived the days of her youth, the hours she spent in the bungalow, nursing her wounds, until blood pooled around her, first bright then gloomy, until she could no longer separate the seeds from the roots.
“My strawberries,” she whispered, covering her face with both hands. “My strawberries.” ***
The writer is a voracious reader of comic books and graphic novels who also loves to write stories in her spare time. She works as an accountant.
References:
[1] Short story was written by Miriam Hermawan
[2] Has been published in ” The Jakarta Post” at Mei 22, 2017

These Walls Will Talk